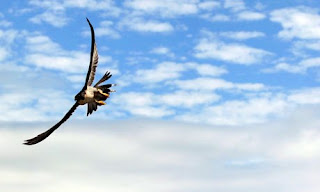 AFTER BIRDS ARE HATCHED, they raise their heads up – often with their beaks wide open, waiting for their food. As nestlings and fledglings, their gazes are constantly upward. From another angle, their Taqdeer (destiny) is to fly. They were born to fly. So very possibly their gazes are also towards the sky anticipating that they will soon fly high.

When these fledglings have their new feathers, they emerge from their nest so that they can learn to fly. For some, their parents or the other adult birds give them flying lessons, teaching them how to glide in the air, how to land, etc.  سُبْحَانَ الله We see Allah Ta’ala’s Qudrat in all of His creation.

On the other hand, we find that animals such as cows, donkeys, mules, horses, zebras and others are created in such a way that they pass most of their lives with their gazes downward, towards the earth. This is their Taqdeer – to remain on the earth; to graze off the earth. They will not be flying.

As for the one who is only absorbed and infatuated with this material world, his or her gaze and attention is constantly directed downward, towards the commodities of this world – on clothes, shoes, jewellery, cellphones, cars, palatial homes and other material items. All of which have their origin in sand and all of which will return to sand. Nothing of Dunya is made to last.

Hazrat Maulana Jalaluddeen Rumi رَحْمَةُ اللهِ عَلَيْهِ had explained: “Your hearts are attached to the things of the world, which have their origin in sand. The women of the world are created from sand, the homes are of sand and the food is of sand. Everything is of sand. They only appear in different forms and colours. The end result is also sand.”

Anyone who gives his or her heart to this world fills the heart with the ‘sand’ of this world. Sand upon sand! Life is wasted on sand. The mind becomes clouded and blinded by the sand of Dunya and forgetful of the objective of living in this world.

A person who is deceived by the outward glitter and glamour passes through life ‘grazing’ upon the things of Dunya, depriving himself or herself of the wonderful enjoyment of flying high in the obedience of Allah Ta’ala and striving to earn His Pleasure and Jannah.

We should understand that “Dunya” is that which makes a person forget Allah Ta’ala – the Giver of all the unlimited bounties and gifts that we are blessed with. The love of the world (Hubbud-Dunya) makes a person neglect and even reject the Commandments of Allah Ta’ala; makes a person distance himself from his Creator and paves the path to Jahannum. This worldly life was for us to accumulate the provisions for the Hereafter. The worldly life was not to amass the commodities of Dunya and not for us to give our hearts and souls to it.

If the heart turns to Allah Ta’ala, we will find that what is with Allah Ta’ala is best and everlasting!

فَمَآ أُوْتِيْتُمْ مِّنْ شَيْءٍ فَمَتَاعُ الْحَيٰوةِ الدُّنْيَا ج وَمَا عِنْدَ اللهِ خَيْرٌ وَّ أَبْقٰى لِلَّذِيْنَ اٰمَنُوْا وَعَلٰى رَبِّهِمْ يَتَوَكَّلُوْنَ ۚ
“Whatever you have been given, is merely a provision for the transitory life of this world, and that which is with Allah is better as well as more lasting. That is for those who have believed and put their trust in their Lord.”
[Surah Ash-Shura  42:36]

“You prefer the worldly life (to the Hereafter), whereas the hereafter is best and ever-lasting.”
[Surah al-A'la : 16-17]

The bird eats and drinks and with the strength that is gained, it flies high. Similarly, the Muslim who wants to fly, who wants to soar spiritually, eats and drinks and makes use of the material things of this world so that he may fly. He lives in this world and utilizes the worldly means. However, despite his apparent association with the earth, he keeps in mind that he is created for the Aakhirah – which is superior. He understands that this world is not home. Home is Jannah - Insha-Allah.

From amongst the diversity of birds, let us be like the falcon which flies high and flies at great speed. And if we become the royal falcon, we will find a place in the court of the King of kings – Allah Ta’ala. Let us not be like the vulture that scavenges and feasts off carcasses. …And, indeed, the world is even more insignificant to Allah Ta’ala than a carcass is to us.

It has been related that once Rasulullah ﷺ passed by the market place and came across a dead kid goat (i.e. a baby goat) which had very short ears. Rasulullah ﷺ held it by its ears and said: "Who amongst you would like to have this for a Dirham[2]?"

The Sahabah رَضِىَ الله عَنْهُمْ said: “We would not want it even for less than that! What can we do with it?”

He ﷺ said: "Do you wish to have it for any price?"

They said: “By Allah, even if it were alive it, we would not want it, as it has very short ears, let alone now when it is also dead!”

Rasulullah ﷺ said: "By Allah, this world is more insignificant to Allah than this (dead goat) is to you."[3]

In another Hadīth, Rasulullah ﷺ said: “If this world was worth the wing of a mosquito in the sight of Allah, He would not have given a disbeliever a single sip of water.”[4]

May Allah Ta’ala grant us the reality and insignificance of this worldly life, remove the love of Dunya from our hearts, and fill our hearts with His Pure Love.

Pornography | A Bait of shaytaan 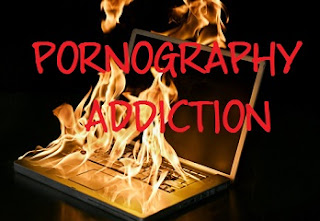 WE ALL KNOW THAT FISH LIVE IN WATER. They generally cannot survive long out of water. However, when fish move towards the surface of the ocean, they become easy catch for fishermen – like we find with the sardine run. People just grab, net and catch sardines from the surface of the water.

And when a fisherman catches a fine fish, he reels it in. He does not throw it back into the sea. Once it is hooked … once it is caught … it is pulled out. …Why? Because fish out of water, when scaled and washed, when ‘masaalaad[1]’ and fried, tastes nice.

In my Dua, I normally say: O Allah, make us the fish that swim deep down in the ocean of Your Ma’rifat.

Like the fish, the Believer is swimming deep in the safety of Allah Ta’ala’s ocean of love. If he moves towards temptation, he makes an easy and fine catch for shaytaan.

Do we want to become a meal for shaytaan? …Because this is exactly what happens to the heart of the Believer who dashes for the bait of sins: His Imaan is ‘scaled’, his good deeds are ‘washed away’, his heart and soul are ‘marinated’ in darkness and fried in the fire of restlessness – to the delight of shaytaan. Allah Ta’ala forbid that this restless soul has to also one day contend with the fire of Hell.

Pornography is one of the root causes of insanity.

Those who have the habit of viewing pornography generally do so at night. They spend the day working and the night watching filth. They are overcome with restlessness and are deprived of sleep. Sleep deprivation is a one way ticket to mental instability. In the long term, the brain is badly damaged, and the person loses his sanity. He ends up in an asylum or shoots himself.

The building began to shake and everyone got up, running down the stairs in their pyjamas, running helter skelter, fearing the worst, expecting that was their end. He said that at that time, my Dua hit his heart: “O Allah! Do not let the Angel of death find us in any sin, in gambling, drinking, pornography!”

He immediately made sincere Taubah. But it took a real life shake up to get him to give up the sin. He was fortunate that he was granted the opportunity of repenting, otherwise what would have been the condition, returning to Allah Ta’ala whilst viewing pornography?

Imagine if you die when viewing pornography. What an embarrassment and disgrace! Thereafter, people will ask – as is common: “How did he die? When? Where? What was he doing?” – Would you like that people say: “He died in front of the computer and he was watching a dirty film.”

Rasulullah ﷺ was asked: ‘What is Imaan?’

Rasulullah  ﷺ replied: ‘When your good deeds give you happiness and when your evil deeds cause you grief.’[2]

One situation is that the person engages in some sin but then genuinely regrets. However, when there is persistence and enjoyment in sins, where is Imaan?

Deriving pleasure in Haraam indicates to pollution in the heart. The heart needs to be washed and cleaned with sincere Taubah and needs to be polished with Zikrullah.

At least recognize sin as sin. Detest it. This is Imaan. The person has Imaan if he is feeling unhappy and grieved when he has displeased Allah Ta’ala.

Understand that whatever Allah Ta’ala enjoins upon us and forbids us from is in our best interests; for our benefit, advantage, well-being and success.

Hazrat Abdullah Ibn Mubarak رَحْمَةُ اللهِ عَلَيْهِ, who was a great Wali of Allah Ta’ala, summed up the consequences of sins, saying: “I see that sins cause death to the heart and becoming addicted to the sins brings about humiliation and disgrace. On the other hand, abandoning sins gives life to the heart. So it is best for you to disobey the nafs.”

ONCE, WHILST WALKING ON A PAVEMENT, I saw the word “NO” painted on the cement of the pavement.

This made me think of the never-ending efforts of shaytaan and nafs in enticing and persuading us to engage in sins. …Shaytaan and nafs are very quick in glorifying sins, saying to us, “It’s ON!”

This is a common catch-phrase, used to confirm some get-together or meeting, whether at the rave club, cinema, casino, or an illicit meeting. For many this means, it’s the place to be, it’s the thing to do. It will bring enjoyment and gratification. You will be ‘with it.’

When a true Muslim is faced with such an invitation to sin or is tempted to disobey Allah Ta’ala and Rasulullah (Sallallaahu 'alayhi wasallam), he boldly and assertively responds: “NO, it’s not On!”

He addresses his nafs:
“Agreed, there is a little stolen pleasure in sin
But what great rebellion this is against the Sustainer (Allah Ta’ala)
(That you use His bounties to disobey Him)
A little while of pleasure and everlasting regret;
What stupidity it is to bury
the Janaza of respect and honour.”[1]

“It’s ON!” is also a phrase which confirms a fight to take place or a fight that has started. When a person is challenged to a fight – perhaps after school, university or college – then if the person accepts, he says: “It’s On!” He accepts the challenge with resolve and firmness to win.

…Of course, such fights or scuffles are not condoned and are not permissible. Muslims are not thugs, bullies or hooligans.

So take courage! Allah Ta’ala is on your side. You will have the support and assistance of the One Who is All Powerful and Almighty.

May Allah Ta’ala grant us the courage to say no to all invitations and temptations of sins and to strive against our enemies, nafs and shaytaan.