Will you break your fast a few minutes early? 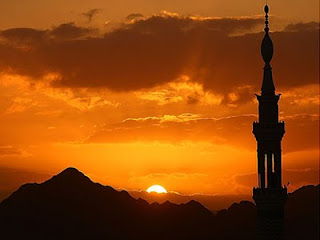 For many years, without fail, I have been giving an example in the month of Ramadaan, that at the end of a very, very hot and long day of Summer, a person is sitting at the Dastarkhaan, close to the time of Iftaar, waiting patiently to open his fast. There is just 3 minutes left for the setting of the sun when he is told: “Eat!…What difference will it make if you break your fast now? What’s another 2 or 3 minutes? ... You have already stayed away from food and drink for almost 15 – 16 hours.”

Even if the person happens to be the weakest Muslim, i.e. in respect to obeying Allah Ta’ala, he will respond: “It is the ruling of the Qur`aan and the Ahadeeth that I break my fast after the setting of the sun and not before that time. It is the Command of Allah Ta’ala and I cannot disobey Him.”

The weakest person’s Imaan becomes so strong at this stage of his fast, that he will not break his fast. He will refuse to break his fast, even if the world’s great personalities have to say so.

So we should question ourselves and also answer truthfully:

Is it not the Hukm, the Command of that same Allah, to perform Salaah five times a day and for the men, in the Masjid, in Jamaat as far as possible?

Is it not the Command of that same Allah to correctly discharge our Zakaah, perform Hajj, treat our parents with love and respect, be faithful to our wives and treat them with compassion (and vice versa for the wives), be honest in our business dealings and be kind and just to those under our authority?

Furthermore, just as it is Allah Ta’ala’s Command to do good deeds; in the same way, to abstain from adultery, fornication, stealing, gambling, watching Haraam, taking and giving of interest and other sins are also the same Allah ‘s Commands.

So we should not be selective and only show the strength of our Imaan at the time of breaking fast. It should be in all actions of ours.

May Allah Ta’ala grant us all the Taufeeq of Aml.

"One night Rasulullah (Sallallaahu ‘alayhi wasallam) woke up and performed Salaah. He prolonged the Sajdah to such an extent that I wondered whether he had passed away. Seeing this, I got up and shook his foot. Perceiving movement, I felt at ease.

I replied in the negative and said: "I swear in the name of Allah, due to the length of your Sajdah I thought that you had passed away. "

Nabi (Sallallaahu ‘alaihi wasallam) said: "Do you know what night this is?"

He said: "This is the fifteenth night of Sha'baan, Allah looks at His servants in this night and forgives those who seek forgiveness, shows mercy upon those who seek mercy and delays the decision of those who harbour feelings of hatred for others”
(Baihaqi)

It is also mentioned in this narration that Hazrat Aisha (RA) heard Nabi (Sallallaahu ‘alaihi wasallam) reading this Dua in his Sajdah: 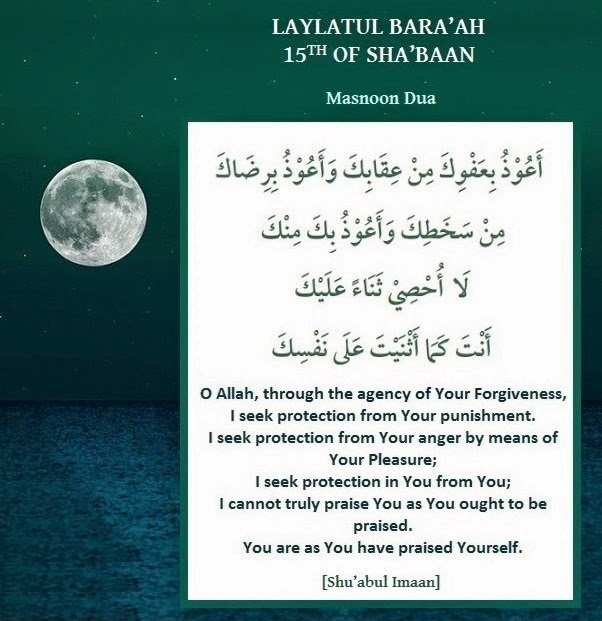