The Story of Submission and Sacrifice 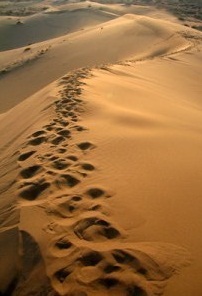 When Hazrat Ibraheem (‘Alaihis Salaam) was told to submit to Allah Ta’ala, he responded that he had submitted himself to the Rabb (Sustainer) of the Worlds. …Some Mufassireen (Commentators) say that there are approximately 18 000 worlds.

After Hazrat Ibraheem (‘Alaihis Salaam) made this declaration of submission, there followed many trials and tests.

As a young man, he was faced with opposition from his father, who was an idol-worshipper. When he invited his father to the worship of Allah Ta’ala, his father opposed and threatened him :

Due to Hazrat Ibraheem’s (‘Alaihis Salaam) rejection of idol-worship, and his preaching the message of Allah Ta’ala, the message of Tauheed, he was thrown into the fire by Namrud and his people:

“They said, ‘Build him a furnace and throw him into the blazing fire.’
[Surah As-Saffaat : 97]

It is stated that for an entire month, the people of Namrud collected firewood, which they thereafter lit, fanning it until it became an intense, blazing fire.

After being delivered from this test, saddened with his people, he left his country (Iraq) and made Hijrah to a place where he could worship Allah Ta’ala in peace, Syria.

Having no children, Hazrat Ibraheem (‘Alaihis Salaam)) thus made dua for a child:

In his old age, at the age of 86, Hazrat Ibraheem (‘Alaihis Salaam) was blessed with a son.

When the child became of age, Hazrat Ibraheem (‘Alaihis Salaam) was commanded to slaughter his son. What a great test!

What must have gone through his heart?  And likewise, the heart of Hazrat Isma’eel (‘Alaihis Salaam)?

But when Hazrat Isma’eel (‘Alaihis Salaam) was informed, he told his father to do whatever he had been commanded to do.

Their entire lives were lives of Obedience and Submission. They were prepared to accept death but not prepared to abandon or reject the Hukm (Order) of Allah Ta’ala.

Allah Ta’ala mentions the reply of Hazrat Isma’eel (‘Alaihis Salaam). He said:  “...Insha-Allah, you will find me of the patient ones.”

His words clearly indicate the beautiful qualities of humility, etiquette, trust in Allah Ta’ala, patience and endurance. There was no claim whatsoever of pride, or boastfulness or superiority or conceit.

Despite having to face so many trials and tribulations, none of the Ambiya (‘Alaihimus Salaam) made a claim of being perfect. They did not rely on their own ability and capacity; rather they focused on Allah Ta’ala. They made the effort and trusted in Allah Ta’ala.

The word “أَسْلَمَا ” alludes to the brave submission of father and son, without question. The claim of Divine Love was made manifest in this immediate surrender and compliance to Allah Ta’ala’s Command. …And as is known, despite the repeated efforts made, the knife would not cut the throat of Hazrat Isma’eel (‘Alaihis Salaam). …This being by the Will of Allah Ta’ala. Allah Ta’ala then ransomed Hazrat Isma’eel (‘Alaihis Salaam) with a ram from heaven.

From this beautiful story, we learn the lessons of SUBMISSION, OBEDIENCE, SACRIFICE – attributes which are sorely lacking in our own lives.

We are commanded to submit ourselves to the Hukm (Command) of Allah; whichever one is directed to us.

Where is the truthfulness of our claim of Love and Imaan, if we cannot comply to obedience?

We have not been commanded to sacrifice our sons. We are only called to give up sins. Just don’t do the sin. Don’t cast lustful gazes, don’t commit zina, don’t gamble, don’t backbite, don’t do sins. …Don’t do and get rewards. Don’t do (sins) and become the Friend of Allah Ta’ala.

Nisbat (connection) with Allah Ta’ala is secured only on Taqwa and obedience to Allah Ta’ala and Rasulullah (Sallallaahu ‘alayhi wasallam).

Once we have established friendship with Allah Ta’ala, then no difficulty, no hardship, no adversity or suffering becomes insurmountable, as is seen in the life of Khalilullah (Friend of Allah), Hazrat Ibraheem (‘Alaihis Salaam).

We also learn that when we say we believe, then we will be tested on our claim.

“We did test those before them, and Allah will certainly know those who are true from those who are false.”
[Surah Al-Ankaboot 29 : 2]

“Or do you think that you shall enter the Garden (of bliss) without such (Trials) as came to those who passed away before you…”
[Surah Al-Baqarah 2 : 214]

These tests in life are to see who still remains sincere and faithful to Allah Ta’ala – and who gives up and turns away from Allah Ta’ala. Of course, we should not be asking for tests and trials. We are weak. However, this world is a world of test.

From our side, we should always seek safety and aa’fiyat (well-being), as has been taught by Rasulullah (Sallallaahu ‘alayhi wasallam).

An Aalim has beautifully described the understanding and approach of a Believer in dealing with the tests of this worldly life:

In this journey of life, we are to establish and maintain our relationship with Allah Ta’ala, no matter what the circumstance and conditions we face…

For those who persevere and work hard to pass the examination of this worldly life, there will be innumerable rewards :

‘ …Those who patiently persevere will truly receive a reward
without measure!”
[Surah Az-Zumar 39 : 10]

…And we ask Allah Ta’ala to make us ever-submissive to Him, and that He grant us ease in the matter of life and death, grant us well-being and the ability to maintain steadfastness in all conditions of life.

·        For hope and consolation, download and listen to the talks: “SABR and HOPE” by Hazrat Maulana Yunus Patel (Rahmatullahi ‘Alayh).